The best Baguette from Paris

Since 1998, the success of “Le Grenier à Pain” has never wavered. Anne-Marie Guillard, initiator of the project in Paris, and Michel Galloyer have given an individual soul to each of the thirty bakeries that exist today in France, Japan, China, Russia, Romania, Dubai and recently the Franchise reached Lebanon in June 2016.

What will be the next challenge?
“The future belongs to those who believe in their own dreams”, says Michel Galloyer.

Our Gemmayze Boulangerie is set in the warm, friendly and elegant setting of the artisan true French bread & viennoiserie. It’s a kind of magic, a mixture of tradition and modernity. The menu includes a selection of mouth-watering salads, sandwiches and a variety of hot & cold beverages. A refined chic desserts display is available for dine in and takeaway.

87m - Seen and be seen at Prune French Bistro, where rustic French dishes are...

107m - Centrale is one of those Beirut bars frequented by locals and tourists...

139m - After she got married and started cooking for her family, Mireille Hayek...

157m - Not for the faint-hearted but something for the intrepid cyclist and...

178m - It is indeed impossible to miss Rana Salam’s shop on Abdel Wahab... 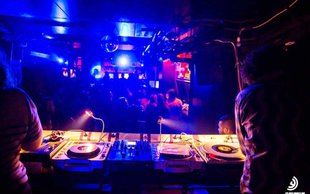 181m - Tucked away off a side street in Gemmayzeh, this little underground club...

189m - Home to an increasing number of emerging talents and established artists,...