Opened in October 2009 in the heart of Downtown with 87 deluxe suites, Le Gray Hotel has become something akin to a nightlife institution in Beirut. A mere walk away from the upscale shopping of Beirut Souks, galleries and top of the line restaurants, a stay at Le Gray puts the visitor to Beirut in the center of urban activity. Created by hotelier Gordon Campbell Gray, the hotel’s modern design was envisioned by architect Kevin Dash, who also designed the Gold Souk. Both business travelers who like to mix work and play, and the leisure traveler will benefit from the unobtrusive luxury of Le Gray’s interior design.

The jewel in Le Gray’s crown is no doubt is rooftop bar Three-Sixty, which offers a panoramic 360 degree view of central Beirut, including an exquisite perspective of the blue-domed Amine Mosque, the mountains and the sea.  The bar has been ranked repeatedly among the best in Beirut, according to international and local observers alike, for its uber sophisticated surroundings – including backlit tables, a glass atrium and lacquered grand piano – eclectic cocktails and live music. The house mixologist is always ready to test out new innovations on willing participants.

In addition to Three-Sixty, Le Gray has three lounges and two restaurants that serve international cuisine, giving visitors plenty of dining options. Across the hotel is the trendy Uruguay Street for more after-hours fun.

But the hotel also offers amenities for those looking for a restorative stay, with a spa and sidewalk café, perfect to while away an afternoon and people watch.

227m - Seen and be seen at Prune French Bistro, where rustic French dishes are...

242m - Wittily referred to as DOWNTOWN’s little sister DT is the perfect mix...

251m - The highly successful AddMind group bring to Beirut a great location for a... 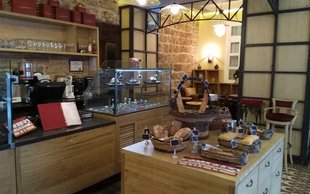 259m - Located on the rooftop of a bank in the trendy Gemmayzeh district,...

265m - Located in an industrial neighborhood overlooking the port, Lux is a hidden...

283m - South Border is an art gallery at the heart of Beirut’s cultural...