A Prism Through Which to View the Arab World

Beirut has kept its reputation as an artistic hub, a magnet that attracts artists and art lovers from across the Arab world. Not surprisingly, some of the Lebanese capital’s many galleries have been playing a pivotal role in promoting and showcasing local and international artists, creating meeting places, where artists and audiences interact and pertinent conversations, touching on art and key societal issues, take place.

One of the key actors undoubtedly is curator and gallerist Saleh Barakat who has been instrumental at curating memorable exhibitions, nurturing local talent and putting predominantly Lebanese and Arab art on the local and international map for decades.

Barakat has been running Agial in Hamra since 1990, specializing in the promotion of contemporary art from the Arab world, mainly from Lebanon, Iraq, Syria, Egypt, Jordan, Bahrain, Sudan and others. Over the past decade, he also focused on young emerging artists form Beirut and the Modernist heritage of the Arab world.

To Barakat, art is a passion and he sees it as his mission to ‘infect’ others with it too. Known to be an astute gallery owner, he is often sought out for his expertise. He has the works of leading Lebanese artists in his permanent collection.

Barakat is known for (re)discovering artists and has nurtured relationships and talents over years, notably Ayman Baalbacki, who rose to international fame. His philosophy sums up as follows: art is an expression of change, we look at it to be critical of society, it is one of the tools we can use very efficiently in order to foster change.

Given the significant changes in Lebanon and the region, artists and art galleries are fascinating prisms through which to view these changes. Agial is certainly one of the art galleries to be sought out during a stay in Beirut. 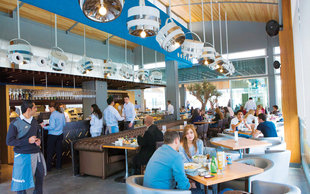 40m - Hailed for their consistency in both service and high end cafe cuisine,...

106m - You will likely spot hundreds of these bakeries around town, shelling out...

109m - When Zaatar w Zeit (ZwZ) opened its first branch in Achrafieh in Sodeco in...

120m - Priding itself on being part of the cosmopolitan city of Beirut, Urbanista...

156m - Blue Note Café has been hosting a selection of local and... 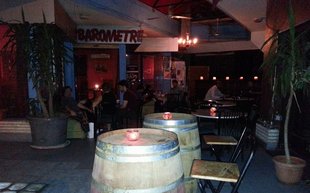 172m - How we miss the days of showing up late, and because the tiny inside was too...

189m - Comsi Comsaj  is a concept that combines authentic delicious...

202m - In the heart of Beirut city! Queen's Suite Hotel is just a short drive...

210m - Located in Makdessi Street just a few steps from the hustle and bustle of...