Orient 499 is a labyrinthine, enchanting boutique situated at the bottom of Clemenceau near the Holiday Inn. It has been showcasing the finest of local and regional handicraft with a modernised twist since 2006.

The shop-front as well as the items inside tends to be eye-catching and exquisite. They showcase craftsmanship and antiques, including modern furniture, clothes, jewellery and accessories from Lebanon and the region, which in the Orient 499 universe, stretches from Morocco to India.

“Syria is renowned for furniture, copper, including dining-ware, pots, and also chandeliers, is made in Lebanon. The idea is that it fits into today’s home,” co-founder Frank Luca explains, surrounded by greenery, in the courtyard tucked away at the back.

“Aida (Kawas), my co-founder, has lots of experience with the artisan world. I always wanted to do something with creation… I used to travel all over the world, working in advertising, specifically in emerging countries, and I yearned to be closer to the stage of creation, to understand how it is done, the different materials, colours, to reinvent the past and modernise it.”

Those who enter Orient 499 can travel the region and retrace some of the old trade networks and artisanal traditions – there are goods from Morocco, Egypt and Tunisia, select fabrics and objects from India, including eye-catching, finely ornamented brass lamps. Besides silk and linen from Belgium and Italy, there is glassware from Turkey and Sarafand in South Lebanon, where a glassblower keeps this ancient tradition alive.

Orient 499 celebrates rich artisanal heritage that has been preserved. Copper, for example, dates from the Mamluk era, it continued during the Ottoman Empire, as did woodwork, which came to prominence in that period. Soap is traditionally made in Aleppo, Syria and in Tripoli given that there are plenty of olive groves in the North of Lebanon.

Luca maintains that more attention should be given to Lebanese artisans. “You need to modernise to ensure the lineage,” he underlined. “The government should support this; it’s part of Lebanese identity. In Japan master craftsmen and women are recognised, each government should do that.”

The modernisers at Orient 499 spend much love and attention to detail on the designs. Besides lanterns and candleholders, there are stools and chairs, including the eye-catching wooden seats with delicate Henna motifs, Oriental carpets, tables with mother of pearl inlay, antique calligraphy on glass, trays, plenty of kitchen ware, brass tables, decorative, luxurious kaftans and clothes, including Loro Piana garments made of 100% Cashmere and jewellery signed Nada Zeineh.

In one of the rooms a Damascene mirror stands out, in another an antique bed invites for a nap. Local artist Abdallah Hatoum is behind the striking Beirut Skyline, a long silhouette of Beirut that will transform every wall it gets mounted on.

Items on display blend together, to create an ambiance. The rooms are themed, notably the “hammam” room where towels and soaps are displayed and there is the delightful children’s corner with toys and clothes in the room adjacent to it.

Luca who develops products and objects further, works with soaps, hand-blown glass, copper, woven items, embroidery, woodwork (with and without mother of pearl), or jewellery. His credo is, not surprisingly: to always reinvent yourself.

Both Luca and Kawas work with a large number of exceptionally skilled craftsmen and women. There are indeed a total of about 100 artisans affiliated to Orient 499, whose traditional savoir-faire transforms items made of copper, wood, and who do embroidery and sewing work.

Furthermore Orient 499 has a sewing atelier and produces in Italy, India and Belgium. Kawas who is in charge of the highly successful clothesline and the designs, has also modernised the caftan and men’s shirt. Her creations celebrate oriental design and showcase a breath-taking variety of first class fabric used for stylish garments with impeccable finishing and colours ranging from earth tones to strong, bold colours. The store’s bestseller is indeed the kaftan.

“We aim to be the best of the region, to celebrate Arab identity, and we had an immediate success doing so, since we opened nine years ago,” Luca underlined, pointing out that while it is a small country, Lebanon is highly versatile and plays a big role in the region.

76m - Kampai (Japanese for “cheers”) is centrally located in the...

78m - The Hub is a Nightlife establishment in Beirut's Central District...

114m - Why does it seem like an Italian restaurant or two are opening on every...

144m - Suz is a bustling and quirky coffee bar tucked away in a surprisingly... 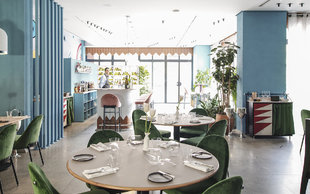 167m - Kaléo reflects the rhythm of its location in Downtown Beirut. With...

168m - With a reputation for the highest standards, Al Sultan Brahim is one of the...

194m - Sabine Mazloum is a jewellery designer and a pearl specialist in Lebanon and...