Be there for a night of Deep and Club House!

Belgian heartthrobs Stavroz are making their first stop in Beirut at MYU On The Roof.

Their music has taken them all over the globe for some insane gigs, and now they are giving Beirut a taste of their work which even, at its beginnings, leaned towards Minimal and Jazz House. Although their sound is hard to define to one genre, they have nabbed titles such as Vinyl of the Month in December 2013 with Germany's Faze Magazine, and also have been play-listed by several big artists including Oliver Schories and Phonique.

59m - Dragonfly is Pacifico's little brother. That is to say the same drinks...

74m - The Arab Image Foundation (AIF) is a non-profit organisation established in...

110m - The name Mitsu-Ya Sushi Bar & Izakaya is composed of the first name of the...

118m - Torino Express represents the essence of a Bar. Set in vaulted cellar of...

118m - Not far from the St Nicolas Steps, on Gemmayzeh’s Gouraud Street is Le...

125m - If you pass by Tabliyit Massaad on Gemmaizeh Street during lunchtime,...

154m - This place is for the Italian purist, the lover of authenticity. No menus... 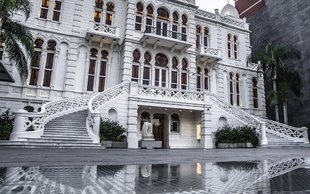 179m - Sursock Museum is undergoing a rebirth. Once a center of Beirut’s...

181m - Located in the Heart of Old Souk Jbeil, Towa is a store specialized in...

STAVROZ @ MYU ON THE ROOF details