Fans of House music listen up! A blend of House and Classic Underground Disco awaits you at Yukunkun club in Gemaizeh this Friday June 12th, courtesy of Damien Barras and Traffic.

Swiss Konnexion Projekt features Djs and artists from Switzerland in collaboration with the Swiss Embassy in Beirut. For their third edition of the season, they will be hosting Damien Barras and part of the underground swiss collective "Traffic" for an all-night set of House and Classic Underground Disco. The party starts at 11.30pm and for those die-hard partygoers, a Happy Hour is included between 3 and 4 am. Freshly back from Japan, Barras is slated to play some heavy rare tunes and strictly Vinyl...naturally!. Through his international record digging experience, he is known to re-invent lost sounds of the past and expose his audience to a new sensory experience through his unique style, which is best described as a blend of House and Classic Underground Disco. He especially enjoys playing long sets (we're talking over six hours), thrusting even the most seasoned dancers into uncharted trance territory. After Montreal and Berlin, Damien returns to Switzerland to collaborate with Traffic, a collective organizing underground events across the country, as a resident dj. He also collaborates with his brother with whom he performs under the alias The Barras Brothers. Check out their "Diggin'Thru Japan " documentary on Japan's musical scene at https://www.facebook.com/digginthru?fref=ts https://soundcloud.com/hypnoticmindscapes/future-soul-podcast-21-damien-vinyl-mix-series.

The opening act will be performed by Rami O and will feature Funk, Disco and Nu Disco music. 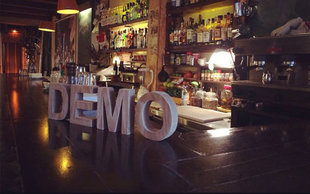