Lebanese Foundation for the National Library

Of all the important cultural institutions in our country, the National Library is among those institutions that suffered the most during the Lebanese war between 1975 and 1991.

Origin:
Viscount Philippe de Tarazi, (1865-1906), a historian and a bibliophile, had a rich personal collection made up of more than 200,000 works, some 3,000 invaluable manuscripts, along with the first issues of periodicals published in the region, and inestimable documents in the history of Arab and Middle Eastern press. Soon, he became aware that a country like Lebanon, depositary of a culture that is more than 6,000 years old, couldn't blossom culturally in its immediate environment and beyond, if it didn't preserve first and foremost its memory, the absence of which means the absence of civilization.

Under the pressure of Lebanese intellectuals, supported by the reports of a mission financed by the European Union, the National Library was finally recognized in 1999 as a national cultural project. This project, carried by Lebanese admirers of books, led to officially adopting the principle of the National Library Rehabilitation. It also provided an opportunity to elaborate a project, at the public level, in which the State exerts all its efforts to enable the Lebanese to fully enjoy their multiculturalism.

Driven by this vision, a private association, with the aim of supporting the project, was born in 2000: The Lebanese National Library Foundation, with a definitive site being given to the institution, the faculty of law, a traditional architectural building, in the district of Sanayeh, decided upon by virtue of a ministerial decree, as a permanent site for the future National Library.

193m - The stately French Mandate period building on Spears is a hub for cultural...

293m - Nestled in a discrete alley way off of Roma Street, is a quaint and...

296m - This little gem of a place has been around for decades for good reason.... 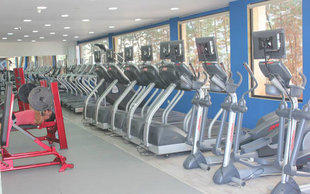 350m - Cookies' heaven! A place to satisfy all cravings with lots of creative...

350m - Spin the hen just relocated to Clemenceau area Hamra and for those who know...