A La Saj was founded by two young Entrepreneurs in January, 2013. The mission was creating a home-like place with exquisite fusion sandwiches and an atmosphere of comfort.

With a variety of over twenty sandwiches, A La Saj describes itself as a fusion take on Saj where they strive to create a mixture of Levantine and international ingredients. A La Saj features flatbread sandwiches made the way they are in the Levantine area of the Eastern Mediterranean.

Another speciality – saj – is a domed grill used for baking flatbread. Dough is rolled out and laid over the dome where it cooks quickly. The breads are then folded around various ingredients such as halloumi or raclette cheese, chicken, burgers, falafel, bresaola or mushrooms.

A La Saj serves both authentic traditional Middle Eastern sandwiches as well as contemporary or so called international ones with all sandwiches under $12. The restaurant also creates various saj desserts by smearing the bread with honey, Nutella or even cheese.

42m - Nestled in a discrete alley way off of Roma Street, is a quaint and...

159m - Salon Beyrouth is a distinctive establishment in the heart of Clemenceau...

195m - The rooftop oasis in the heart of Hamra. Swim, drink and eat among the trees...

198m - This little gem of a place has been around for decades for good reason....

213m - Hotels are the same in most cities, but Beirut is not like most cities. Why... 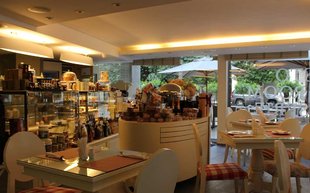