Happiness in a Jar

For a salad lover stuck in an office, Jars & Co is like janneh (paradise). Started by Claude Berti and two friends, very much on a whim, 18 months ago, Jars & Co takes recycling as serious as healthy food. All her food, whether delivered or served at her recently opened Food Concept Boutique near the old Pacifico in lower Monot, except the wraps and bagels, come in glass jars.

“Jars & Co regulars really like the concept,” Berti said. “They also like the layers of salad, that you see what you eat. And of course shaking your salad in order to mix the dressing evenly.”

The salads she has on her menu are not common salads and they are fresh, only prepared once an order has been received. There are plenty of unusual combos and healthy ingredients like nuts and seeds added. The result: healthy, hearty tasty salads.

Two of the salads – the Geisha and Nordic salads – are served with salmon (brain food), one with quinoa (Hometown) and the Jezzine Goat comes with goat cheese sourced from Jezzine, “bakle” also known as farfaheen in Arabic (purslane) and “rocca” (two local salad varieties) in addition to fresh thyme, tomatoes, and the oil and lemon dressing.

A current, seasonal special is the Kale salad, which is crunchy and is paired with wheat barley, apple, cranberry, raisins, walnut and lemon mustard dressing.

In addition to her salads, there are a range of Bagels, including classic Salmon Bagel, baked potato wedges and Italian pasta also served in Jars, which can be heated up and Wraps (served in recyclable paper boxes), on the menu.

Berti has worked as a jeweller for 20 years. She had two shops in Beirut and while still in the industry, her approach has shifted, especially since buying her friends out. She is now running Jars & Co on her own.

“I like to cook and I believe in healthy food,” she said. “It has been hectic but I’m managing now and have seven people working for me.”

Jars & Co is blessed with much daylight and space for tables outside at the entrance of the alley where Pacifico used to be. The area presently has calmed down a lot but Berti is certain it will see a revival. It certainly offers a friendly and laidback setting for (business) lunches and dinners at night.

Jars & Co also caters for special events and sweets cravings: there are snacks and desserts available – of course in (smaller sized) jars.

For all delivery orders, Jars & Co has been trying to keep the packaging at a minimum and to ensure it is recyclable or reusable. The jars can be returned or reused – Berti frequently posts tips for example how to turn the jars into lanterns. With the loyalty card, customers can redeem a freebie after having returned six empty jars.

Throughout the seasons, Jars & Co offers specials, notably around Easter, where “maamoul” are available in a jar or during Ramadan, when Berti offers special combos including a few dates to break fast. In winter, Jars & Co adds soups to the menu.

Many of her customers are regulars, notably working in the NGO sector, at embassies, and corporates. Berti’s happy to have all ages featured among her jar-and-salad loving customer base.

61m - Situated a stone-throw from the Monot Theatre, the Oriental Library and the...

83m - Named after its setting on Rue Monot and tucked away behind pretty Saifi... 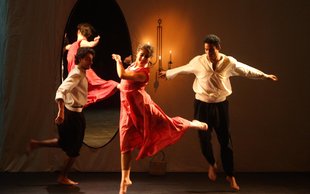 136m - The Monnot Theatre is a private theatre and is a cultural hotspot in Lebanon...

152m - Sahyoun keeps the foundation of their restaurant business simple: they are...

175m - After the success of her first restaurant the grill house and bar, “La...

248m - All our desserts and breads are gluten-free, lactose-free and white...