Many in the tech industry are already preparing for ‘Mixed Reality’ systems, new environments composed of both material and virtual contents that will eventually become part of our daily lives.

We are living in an era of increasing hybridization, where systems interlace and mesh with one another regardless of their compatibility. Many in the tech industry are already preparing for ‘Mixed Reality’ systems, new environments composed of both material and virtual contents that will eventually become part of our daily lives. Starting with the premise that technology is not only a matter of science and commerce but a much more complex field related to ethics and aesthetics, these paintings and installations question how technology is rewiring our primary experience of the world and the history of the image.

How can we explore these new digital environments without subscribing to empty techno-optimism, and furthermore, how can the arts continue to evolve using current media strategies of immersion and collective experience? There are two primary strains of hybridization in this series: the first is the relationship between technology and ecology, and the second is that of classical painting and contemporary media. I am interested in how painting can be understood within the history of media as a whole (which includes digital media and virtual reality), as an illusion, a game of surfaces and subterfuge.

I select materials that communicate the difference between the densities of possible ‘mixed realities’: earth elements and air elements; the natural pigments of pottery and the ethereal hues of digital technology; the lightness of surface illusions and the weight of rocks, clay and waste. As we move further into an increasingly technologized existence, my hope is that we can find new ways to assimilate this new dematerialized, flexible, hyperreal substance that emanates from screens and machines all around us with the heavier, more embodied masses of the earth in ecological crisis.
~~~~~~~~~~~

“The idea of virtual reality only appears to be without history; in fact, it rests firmly on historical art traditions, which belong to a discontinuous movement of seeking illusionary image spaces.’”
-Oliver Grau, Virtual Art: From Illusion to Immersion

122m - In the heart of Beirut city! Queen's Suite Hotel is just a short drive...

152m - Located in Makdessi Street just a few steps from the hustle and bustle of...

187m - Hotels are the same in most cities, but Beirut is not like most cities. Why... 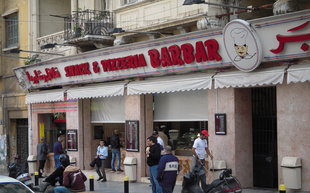 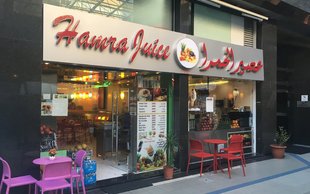 199m - Fresh juice in Hamra, all kinds of fresh fruit.  Waffles are served...

205m - The rooftop oasis in the heart of Hamra. Swim, drink and eat among the trees...