Sitting on the pavement outside his shop, Avedis “Avo” Der Boghossian frequently rears his head, then excitedly points towards a man pushing a trolley full of junk. Someone else passes moving an old sofa. A while later, he spots a pickup filled with metal parts. “Trash is raw material that I can use,” he explains.

The man is obsessed. And has been for decades. Before working full time for The Vintage Shop, he used to be employed and during lunch breaks would venture to a nearby junkyard. “I am a junk addict,” he asserts grinning.

A closer look at his junk reveals that he is a formidable junk visionary. The Vintage Shop being bang at the key thoroughfare to Nabaa, allows him to keep a close look at junk traffic passing by and feeding his addiction.

Where others see no use nor value, Der Boghossian spots opportunity and a renaissance. “The whole idea of repurposing comes with being Armenian,” he explains. “It’s a way of being, of thinking; the concept of creating something from something. It was a hobby that I started in my free time, at night and on weekends, many years ago.”

Der Boghossian and his brother and partner in crime Krikor “Koko” are inseparable. The two are a mean team, veritable junk raiders, when roaming through Souk el Ahad, casually eyeing the stalls like hawks, greeting traders they’ve become friendly with over the years, bargaining here, pulling faces there. It’s all part of a performance with a purpose – to score top junk.

The love-turned-obsession for junk came gradually to the Der Boghossian brothers. Growing up, they worked like most relatives on their father’s side, as tailors. The tailoring business their father set up started out making army uniforms out of WWI and WWII parachutes. “That’s how we became all tailors on my father’s side,” Avedis recalls.

The eight years he worked with his dad also taught him how to look at a woman (and man) and make perfectly fitted pants… “The way to a girl’s heart is through her pants,” he added pokerfaced.

The tailoring business went down after a bomb hit the store. Slowly but surely, Der Boghossian and his brother Krikor started to dismantle the tailoring workshop and claim the space. “It was about music, our buddies, basically our night club, where we met for happy hour.”

Besides collecting junk like old telephones, chairs, tables, industrial antiques such as pieces of machinery, alarm clocks, ventilators, or hospital lights, the duo used to work with what they’d found and repurposed their finds, using spare parts to create something new. This being years before the advent of the Internet or upcycling, Avedis used his imagination and vision. “We had fun! We didn’t think of selling these things,” he recalls.

When he tried to rent the space out in 2012, the junk brothers realised that they had a lot of stuff. Too much stuff, in fact. Not only at the old tailoring workshop but also all over their mother’s house, filled from basement to attic with years’ of treasures found junk hunting.

Der Boghossian changed tack, called a “brocante” (second-hand purchaser) and sold some things off. He then added a lock to the front of what now officially had become The Vintage Shop. Not long after placing his number in the window did he start receiving phone calls. A pub/restaurant in Hamra, February 30, was his first client. By now he works with interior decorators and also film industry people that rent props out.

To say the shop is full is an understatement. It is chock-block full! Right in front is one of their most incredible finds. One day, Avedis saw a red part stick out of a truck and like a sniffer dog, he recognised that is was a pinball machine and bargained it off the truck. “It was seen as gambling, when we were kids and we were not allowed to play it,” he recalls. He had dreamt of having one for a long time. “The Title Fight” he scored was made in the USA and still works.

Some of the many of old phones have been transformed into lamps, the dial function working as a dimmer. One of the most eye-catching pieces is a revamped Communication kit dating back to World War II that was intact but works as a lamp now. Jerry cans from the 1940s and 50s were transformed to store vinyls. With vintage weddings being trendy, The Vintage Shop rents out and sells many suitcases. Much of what has been found, rescued, refurbished or repurposed comes with a story, such as the dentist chair at the back of the shop…

Signs, including individual letters hang from the ceiling. Besides spotting valuable junk traffic under the flyover in front of their store, Der Boghossian finds things through connections and everywhere he goes: he unearthed telescope tripods while on holiday in Armenia.

Der Boghossian’s junk typology consists of three categories: pure vintage stuff that he sells as it is (telephone, alarm clock or Armenian font typewriter). Then there is individual stuff like for example a ship’s propeller, a funnel or glass top of a scale and then lastly, the synthesis of both, which can be a combination of vintage with parts that leads to something new, like a lamp or table.

The Vintage Shop might have more business in Hamra or Achrafieh but both brothers like being in Burj Hammoud, their primary junk hunting ground. Avedis has been living from the shop for one year now and is busy expanding. The space next door has been cleared out and is slowly being turned into a showroom to allow special vintage pieces and repurposed creations to be exhibited. The showroom will also be about music, especially 80s music, and reviving the old hang out space the two brothers used to have.

Words By Nathalie Rosa | Photography Courtesy of The Vintage Shop 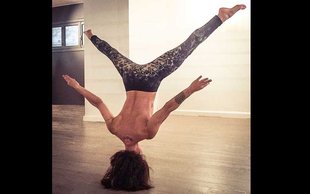 182m - The ambiance of a traditional Italian pizzeria in the heart of... 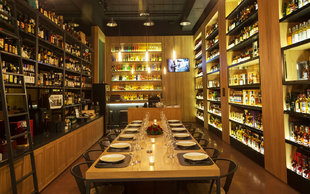 196m - The Malt Gallery is a liquid library carrying the widest choices of...

249m - French cuisine at it's finest, this delightful restaurant is serving... 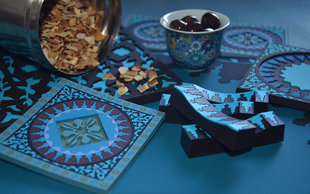 263m - Made out of PVC or silicone, some in two-tone some in multi-tone patterns,... 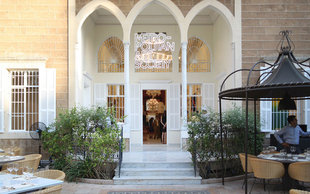 264m - Nestled in the fancy heart of Beirut’s Furn el Hayek, below Liza and...