"... a peripheral and industrial location making Marfa’ effectively the first gallery in this part of Beirut."

Alternative art spaces and politically unstable times usually come hand in hand. Rather rare is the case of Beirut and Lebanon where large-scale investments are being undertaken by private entities with the aim of establishing white cube galleries, foundations, centres or museums. Besides MACAM three years ago, Aïshti Foundation in late 2015, the Saleh Barakat Gallery and Dar el Nimer for Arts & Culture early summer 2015, Joumana Asseilly opened Marfa’ in late 2015.

A trained interior decorator, Asseily, after spending time abroad, returned to Lebanon in 2006. After having been affiliated to Ashkal Alwan, the Arab Image Foundation and the Beirut Art Centre, she had an epiphany in early 2015: to open a contemporary gallery. Less than a year later, Marfa’ opened its doors with Vartan Avakian’s Collapsing Clouds of Gas and Dust.

As the name reveals (marfa’ means port in Arabic), Asseily has chosen a peripheral and industrial location making Marfa’ effectively the first gallery in this part of Beirut.

Currently on show and running until 31 August, is filmmaker and artist Rania Stephan’s On Never Being Simply One. On display in the main room kept in white with bare concrete floors and a glass window front, are 64 Dusks – photographs, Stephan took during a residency in London. She would always take them at the time when Egyptian cinema star – Soad Hosni who fell to her death from a balcony in London in 2001 – died. The atmospheric shots, given the time of day, are kept in tepid light. Being paired they seem to not stand on their own – a possible reflection of Hosni’s state, a possible inner rupture… They are part of a larger body of work and academic engagement with Hosni Stephan pursued.

In a second room, screens Invisible Images, part one of her trilogy Memories of a Private Eye and in a side room, accessible from outside, is a lovely installation Stephan did in collaboration with Stefan Tarnowski, Who Else Could It Be?, a peripatetic tale of images, cameras and slides, lost and found – featuring once again Soad Hosni.

To add to the material on show, Marfa’ organized and open air screening of The Three Disappearances of Soad Hosni, one of Stephan’s most important films thus far, turning the show into a bit of a Gesamtkunstwerk. Using footage taken from the 82 feature movies she starred in between 1959 and 1991, Stephan creates a marvelous and very subtle three-part ode to Hosni and Egyptian cinema. This triptych contains dialogues and story lines, in which the Egyptian celluloid star is femme fatale and also battered woman, laughing as much as and crying. Stephan weaves this new oeuvre with as much perspicacity as humour.

Beirut’s cultural institutions and art galleries prove not only that there is a keen interest in local, regional and international art but a vibrant local art scene. Given its location and carefully curated exhibitions, Marfa’ is a wonderful addition. 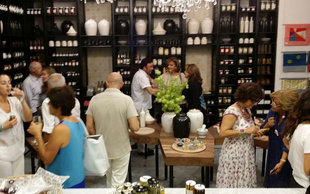 187m - Once upon a time, wars were waged for spices (nutmeg) and new travel routes...

216m - The highly successful AddMind group bring to Beirut a great location for a... 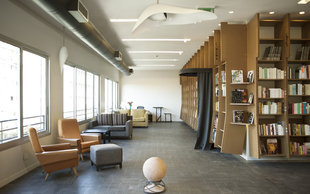 236m - Located in an industrial neighborhood overlooking the port, Lux is a hidden...

242m - Located on the rooftop of a bank in the trendy Gemmayzeh district,...

294m - The Hangout Beirut is a Bistro and grill located in Gemmayze, in an old...

311m - If you pass by Tabliyit Massaad on Gemmaizeh Street during lunchtime,...

313m - Home to an increasing number of emerging talents and established artists,...