Unravelled emerged from Dedman’s large-scale research project for the Palestinian Museum on the history and politics of Palestinian embroidery, which culminated in the exhibition At the Seams in Beirut in 2016. Unravelled encompasses the wider practice of embroidery, reflecting on the ways in which different artists, from the twentieth century until today, have dealt with embroidery’s various significations as concealment, as narrative, as a marker of time and as a form of gendered labour. The exhibition explores these different positions and experiments with the generative exchanges embroidery can confront by virtue of its situation between masculine and feminine; art, craft and industry; the figurative and the abstract; concept and materiality; the decorative and the destructive; concealment and revelation. Embroidery has always been a practice of the periphery, so when an artist includes it in his or her practice, it brings to the surface of art a critical dimension: it offers opportunity to engage with questions of labour and process, the gendered gesture, and dichotomies of construction and concealment. Vocabulary doesn’t value this activity: to embroider is to bring deceitful elements to something, to embellish a story. Embroidering therefore means hiding a surface, playing with the authority of material, challenging its integrity.

The repetitive binding of thread to fabric brings physical structure to material; embroidery organises space and marks the passing of time, both of which have a relationship to contemporary economies. Embroidery is historically connected to elite leisure, yet simultaneously practiced for income by women with little social power. Paying attention to embroidery made by hand addresses the invisibility of craftswomen and men, and drives us to engage with the complexity of a practice with both a gentrified past and commodified present. Embroidery today is a mode through which such issues might be negotiated, subverted and unravelled.

The exhibition unravels in three different sections. The first deals with embroidery and language. Needlework is the organisation of lines, and as such organically associated with handwriting. Letters and writing can be a way of playing with flatness and abstraction while introducing meaning to a surface. The authority of text sits in contrast to the modesty of the stitch, yet embroidery represents a complex language of its own. The work in this first stage of the exhibition considers embroidery a form of translation, a mode of simultaneously constructing meaning and unravelling established values.
The second section explores embroidery’s association with the domestic and low-tech as something artists are playing with in relation to the photograph and the digital. From family archive to media documentation, the modularity of the cross-stitch breaks pictures down into pixelled units; needlework becomes a way of rebuilding an image, and potentially intervening within it. The materiality of embroidery lends its final visual forms weight, yet also allows for a maker to challenge the authority of the image itself. Embroidery records the slow erosion of the embroiderer’s eyes, and physicalizes the act of seeing.
The third section is concerned with showing the construction of embroidery as a two-faced structure: a conventionally neat exterior, and a disordered reverse – an opposition troubled by the pieces in this final section, which are deconstructing both process and material. It is the back that conventionally reveals embroidery’s construction, its knots and errors, the accidental and strategic jumps of the needle, as the embroiderer pushes against the regularity of the canvas. This janus-faced quality captures something inherent in the etymology of embroidery: the implication of fiction. To embroider a story is to embellish and elaborate; the relationship between language and ornament is materialized in its gesture, something artists are both using and subverting in Unravelled.

93m - Launched in September 2013, the venue seeks to contribute to the regional...

249m - Attracting a mixed crowd of Beirut youngsters who come to enjoy the...

777m - A stone throw up from Sioufi Gardens and 10 minutes’ walk from Sassine...

1093m - The name is a bit of an understatement. L’appartement is quite the...

1187m - The organization's programs are guided by Sri Sri’s philosophy of...

1395m - The Bayrut Express is a Twisted Urban Concept Store that sells an eclectic...

1477m - Nestled amidst residential blocks in Hotel Dieu, halfway between the Grand... 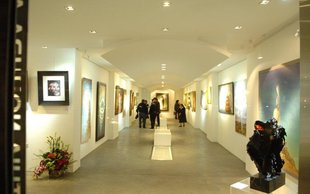